The 1990s is undoubtedly a watershed period for video art. Since its inception, the close relationship between video and “television”was beginning to collapse at this moment, increasingly replaced by the rise and widespread use of projected images. Since the ninth edition of Documenta in 1992, projection works began to appear on a large scale at international exhibitions. The more “cinematic” experience they offered presented a challenge to earlier modes of video art, and forced art critics, curators, and institutions to re-consider the future of moving image art. However, the sudden rise of the projected image also caused a lot of controversy, especially with its “advantages”—flexibility of scale, ability to fit with architectural space and unparalleled immersive viewing conditions—projection created new aspects of “public-ness” and “entertainment” going far beyond the exhibition experience that could be provided by monitor-based single-channel videos or video installations. On the other hand, the “tradition” of video had also encountered enormous challenges. The radical “utopian dimension” that it had long represented, with its use of the unique “feedback” mechanism, its “anti-media” and anti-hegemonic ideological practice, and self referential explorations of the subjective were gradually replaced by the fictional and illusory character of the projected image. Behind the “hard” of the monitor and the “soft” light of the projection, there are many contradictions between concept and narrative, materiality and demateriality, the “white cube” and the “black box”.

From the perspective of the medium of film, the debut of projection in contemporary art is undoubtedly a “good thing,” with the museum becoming a new base for film to trace back its own history and explore possibilities for the future. “Gallery-based cinema” preserves the legacy of film through projection while stripping off the outer shell of its “media specificity,” bringing it into dialogue and collision with other media in the field of the exhibition, and thus creating a more “hybrid” contemporary film form. But from another perspective, the powerful deployment of film is bound to cast some kind of “shadow.” In a round-table discussion entitled The Projected Image in Contemporary Art, Hal Foster proposed that the popularity of films in contemporary art led to the “reformat” 1 of various other practices. This provides a “reverse” focus for the exhibition Anti-Projection: returning to a time before the dominance of projection, and tracing key features of “classic” video aesthetics.

This exhibition focuses on the material and spatial aspects of early Chinese video art. The video installations and sculptures presented are based on the basic form of everyday objects such as the TV/monitor, but they attempt to block the image machine aspect of these “ready made products” by combining them in new physical modes (“video wall”, “video relief”, “kinesthetic painting”, etc.) to form a strong “presence” in three-dimensional space. This kind of presence invites viewers to enter a field that emphasizes the “here” and “now,” where the audiovisual is only used as a surface or “passageway” to bring the body into a kinesthetic system composed of different ontological levels: space, time and matter. In fact, video installation underwent the same process as the “expanded field of sculpture” of the same period, the pursuit of which causes the subject to be swept in to a “performance” mechanism. Under this mechanism, televisions or other objects in the works are transformed into plastic elements, and attached to some material texture of “imagination” or “replacement” or “concept”. This texture has a clear “manifesto”: not only to resist the pictorialism of two-dimensional vision, but also to reflect on the popular image culture of mass communication.

Chinese video art of the 1990s was still in its early stage. Although limited in the number of participants and of works produced, it still concentrated a variety of artistic endeavors, both experimental and adventurous in nature. The twenty-year lag behind the West did not constrict artists; instead this framework encouraged their attempts to surpass what had gone before. Despite having extremely limited resources—lack of equipment, shortage of funds, and backward technology—artists working with video art rapidly completed the transition from single-channel to installation, and set out to build relatively complex systems to reflect the media and social environment they faced. In the exhibition Anti-Projection, different works respond to this theme. In Zhang Peili’s Assignment No.1 (1992) and Focal Distance (1996), a large number of TVs are arranged to form a linear structure possessing a certain “rational” order. The superposition, gradient and progressive relationship between the pictures is like a deduction and analysis of reality, while the industrialized appearance of the TV monitors (uniformity of line and color) also gives strong support to this “sense of order.”

Unlike Zhang Peili, Chen Shaoxiong’s Seesaw (1994) deliberately carries out a critical “mixed assemblage” of reality. Here, three television sets and a gun are allegorically combined, releasing signals of anxiety, alertness and instability behind a seemingly integrated state. The gesture is provocative, and this method was also implemented in the artist’s subsequent Sight Adjuster series, a similar “dystopian” reminder, hinting at the unspeakable secrets of vision subjected to daily discipline.

Both Hu Jieming’s Home? (1998) and Yang Zhenzhong’s Fish Bowl (1996) contain close-up images of people. Generally speaking, early video works portraying the body and face have been given the psychoanalytic label of “narcissistic”2, but this aspect of narcissistic performativity is partly resolved through the process of combining a work into installation, and the communication mode shifts from closed to open. The material parts of the two works—a door and fish tanks—both possess metaphorical possibilities, constituting a “screen” in front of the body being filmed. The body displays itself through these materials, and is also shaped by them, as if it has undergone a second process of “sculpture” in addition to “representation.” The images can only be seen through a tiny keyhole or rising bubbles; thus vision is put through a doubly physical and semantic “dilution,” where the physical materials become the intermediary between the viewer and the monitor. Rubbing against the image on one side, and causing the viewer’s gaze to become opaque on the other, the materials bring the position of the viewer into the process of production of the work’s meaning.

The only projection in the exhibition, Wang Gongxin’s Baby Talk (1996) is similar. The vertically projected light is no longer cinematic, but creates a fragile, ephemeral screen. The “milk” flowing in the crib disturbs the stability of the image, and the resulting vortex and noise also cause a “disorder” of the entire audiovisual experience – this disorder is due to the constantly changing meaning of viewing as it moves through the mediums of light, liquid, and the bed in the process of arriving at the screen. In other words, the existence of the material part of the work is the “mechanism” set in place by the artist to express the concept. Conceptual meaning occurs precisely because the viewer’s gaze is “moving through” different materials. In contrast, the material parts of Zhu Jia’s two works are “hidden” inside single-channel video images. Whether it’s the camera’s probing into the closet or “looking out” from within the refrigerator, both force us to have repeated encounters with everyday objects that are blocked between our line of sight and the picture, our gaze seeming to intimately “caress” them.

Anti-Projection does not aim to be a completely historical retrospective exhibition. Rather it focuses on exploring the creative logic and specific strategies of artists in early video practice, such as how the ratio of visuality to materiality was allocated within complex processes of meaning production, or how effective connections between images, installation design, and viewing were established. Admittedly, the “tradition” of video art before projection has gradually been forgotten. However, as an important stage of media art, it still has some archaeological value – just as how in the exhibition one can instantly get a sense from that era, which although materially lacking was full of creative intensity, up until our current overly-mediated era, why the moving image has always been the most important channel for us to establish connections with the world. 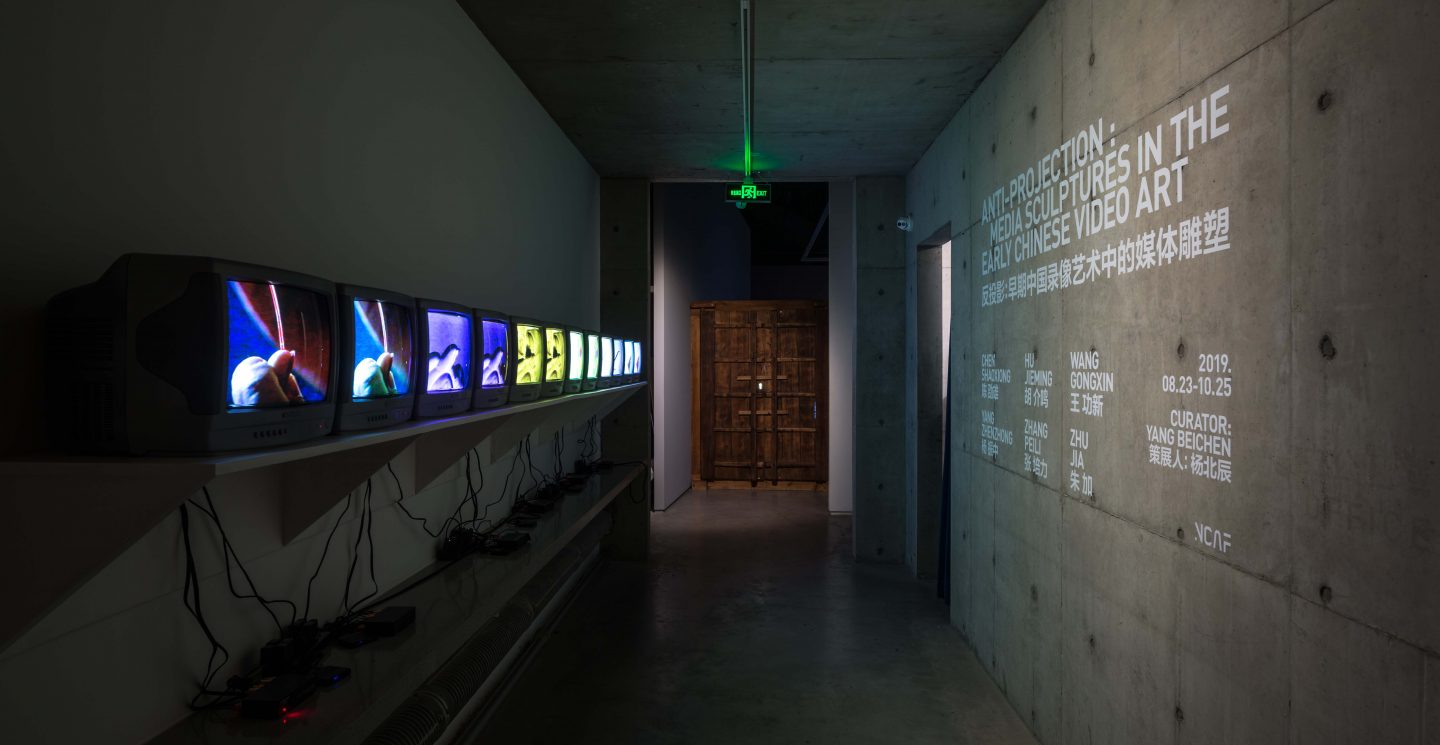