“Polyphonic Strategies” is grounds on the “hypothesis” that the art of moving image is a point of departure for the artists in this exhibition. In Rosalind Krauss’s iteration of the “expanded field,” sculpture in the postmodern context has achieved a “reversal” on the “periphery” of the field. Thus, it emerged from the shadow of modernism to become a medium that can “integrate” all other elements, which transcends media boundaries. This conclusion, enforced by the “post-medium” theory Krauss later proposed, further established the legitimacy of the artist’s cross-media practice. While in that process, the moving-image, a “new media” of the time, was receptive to such impact. Hence, is there a possibility of exploring the expanded field based on video art in the present? In this exhibition, we will examine this hypothesis through the works of five artists. In their practices, the relationship between the moving-image and other media has always been a subtle and intimate one, involving various external forms, materials, and processing methods, pointing to complex ontological entanglements within the medium. Of course, “Polyphonic Strategies” does not attempt to verify this argument but rather provide a new perspective on the artist’s specific work and the efforts behind inter-media logic.

Dr. YANG Beichen is a curator/scholar of film and contemporary art. He lectures on film and media studies at The Central Academy of Drama (Beijing), with research interests on the theory of Moving Image, Media Archaeology, Technology&Ecology, and New Materialism. His curatorial practices corresponds with his multidisciplinary academic approaches, including “New Metallurgists” (Julia Stoschek Collection, Düsseldorf), “Earthbound Cosmology” (Qiao Space, Shanghai), “Anti-Projection”(NCAF, Beijing), “Micro-Era” (Nationalgalerie, Berlin), “Embodied Mirror”(NCAF, Beijing). His recent projects include co-curating the Guangzhou Image Triennial 2021 (Guangdong Museum of Art, Guangzhou) and as a researcher at large participating in the exhibition project “Socialist Realism” of V-A-C Foundation (Moscow). He has contributed critical essays for the catalogues of the artists such as CAO Fei, Laure Prouvost, Omer Fast and HO Tzu Nyen, etc.. His academic monograph Film as Archive will be published soon. 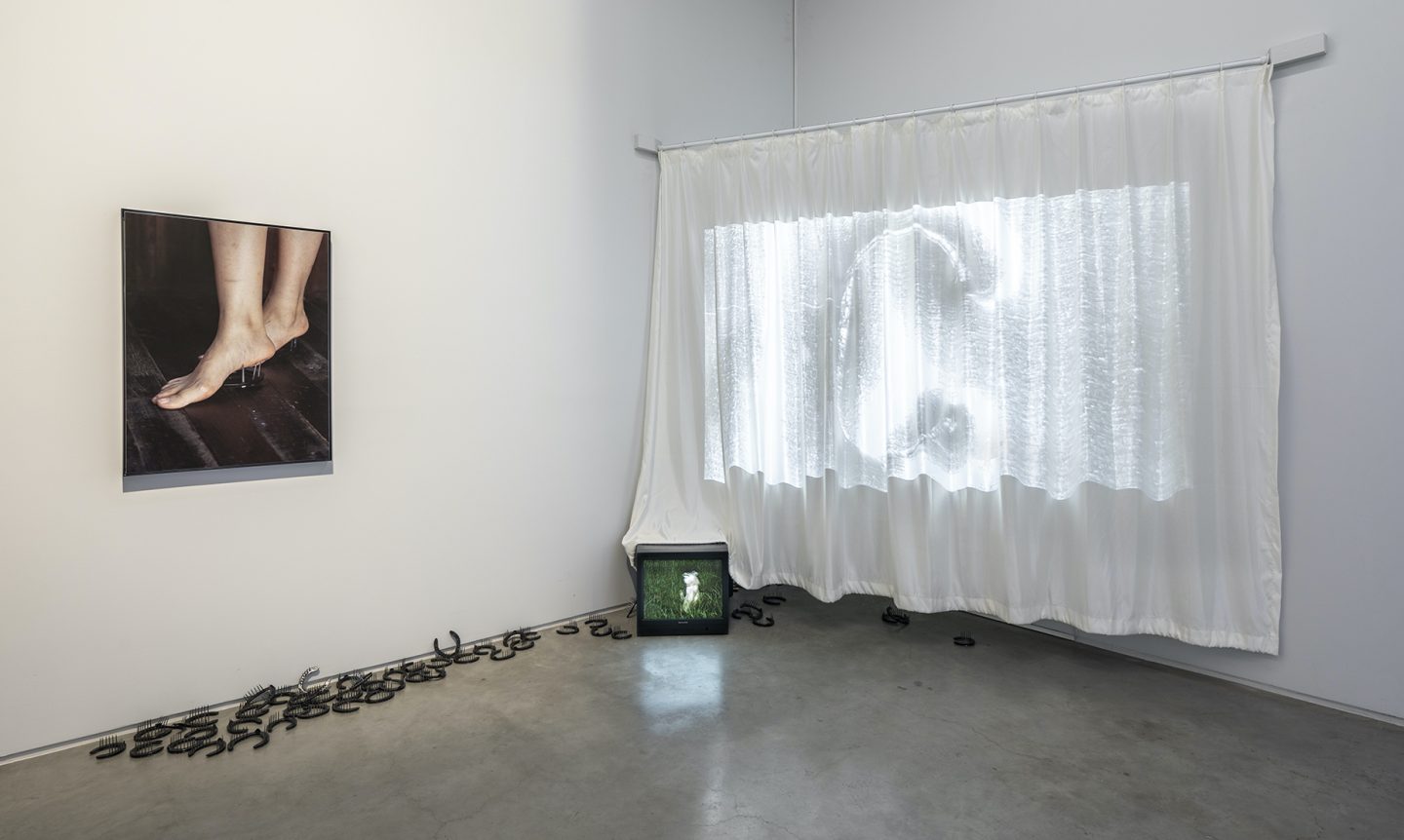 Heritage Falls Park, located in the Monterey Park near the Vincent Price Art Museum, consists of a grassy hillside bisected by a tiered fountain with a niche to the end. It was built in the late 1920s by a real-estate developer named Peter N. Snyder, who originally installed in the niche a marble sculpture of a female figure that he referred to as “Athena” in honor of his Greek heritage. The sculpture mysteriously disappeared shortly after it was installed, and the fountain sat empty until 2005, when the Monterey Park Historical Society installed another “Athena” as replacement. Neither the original sculpture nor its replacement bears any of the formal signifiers commonly associated with the Greek goddess Athena.
In 2016, artist Wang Xu granted Equitable Vitrines the permission to use his sculpture Eve (2015) in a proposal for an intervention at the Heritage Falls Park. Wang produced Eve at a marble quarry and commercial sculpture factory in Quyang, China by recovering a damaged statue of the Biblical figure and re-carving it according to the image of a woman who worked at the factory. The proposal would have temporarily placed Eve in the fountain alongside the replaced Athena, which was also imported from Quyang. Equitable Vitrines rescinded its proposal at the conclusion of a debate over the project at a meeting of the Monterey Park City Council in 2017.
Wang Xu’s Garden of Seasons features a marble sculpture, Untitled Athena, and a two-channel video, “Garden of Seasons” that combines footages recording the process of making the Athena sculpture, and the video clips of the city council debating on the destiny of the sculpture, Eve. Through language, the meaning of art becomes abstract. It’s the Ice is the special extension of “Endless Peaks”, which is consisted of three different parts. Including the 5-channel colour, b&w and silent video present monk’s daily life, working and resting on the Mt. Tiantai. The triptych work, Endless Peaks – It’s the Wind, is made of photography, acrylic and drawing on wood panel. Along with the “icy floor” which is installed with the stainless steel mirror that completes the overall concept. Questions such as Abstract and Realistic, Realism and Classicism have always been part of the problem of self-presupposition in the Chinese art industry, and now this presupposition seems to bring us to a kind of thorny land. No matter it is our self-expression or the imagination of “the other”, this splitting and ambiguous face has become a new spokesperson. In the Cilm, I convinced the photographer who often works with me to play the roles of model and makeup artist together. Once I saw this video on YouTube, a compilation of moments of capture in
animal hunts from the North American Hunting Association. With the hunter’s gun locked in place, the animals were cursed and unable to escape. The second before being shot, their eyes look confused and fearful, stared straight in the direction of humans, and then all fell to the ground with a thud. I felt confused and vulnerable by this violent energy, as a user commented under the video: The most dangerous animal in the world.
Although hunting is ancient and primitive, I felt uncomfortable revisiting a killing “spree” in such an intense and unequal way. In another sense, it resonates with the human pleasure of pursuing absolute power. Therefore, I took this video of the hunt and juxtaposed it with another
video. I banged out some negative words on a brass plate and tuned up the metal clanging sound to echo the sound of the gunshots in the former video. On the screen, a blinking of huge eyes shows startling unease from hearing loud noises. It looks directly into the camera lens, making it impossible to avoid, with which to provoke the viewer’s fearful association
with other related matters. I scatter the nailed horseshoes along routes people must encounter in the space in order to discuss a concealed emotional boundary. Stepping on the tipping point of the nails triggers a sudden ache, by which I would like to refer to those strong yet vague pain gained from the interpersonal relationships.
Pain could be conceived as one of the challenges for people to undertake in the reality, and we all have different reactions towards it. No matter it is the immediate turning away from the extreme painfulness, or it is the gradual process that a horseshoes-like thick cuticle grows out and covers the physical body after a long distance walk, both are examples of an inner decision.

, #10 is a way of looking at the reality based on a person and one’s body, hence realizing image production from what has been seen and heard. Thus, they are the pictorial realities in response to or parallel to the physical reality. The body becomes the critical entry by which the artist enters abstraction – it is the intersection of all realities, the abstraction within the real, and vice versa. The video works []#1, []#2, []#3, []#4 are a series of experimental short clips. These works adopt various editing methods to present the combinations of sound and moving images.

Art and art writing of Li Ran and Chen Baiqi

“The Visible and the Invisible” in the Expanded Field